Wailings in the Forest

An indigenous family, one of the last forest people of old, copes with the unusual changes in their ancient environment, pressured by the imposing lifestyle and customs of the tribes on the plains.

Bagane Fiola is a filmmaker from Mindanao, in southern Philippines. His second feature film Baboy Halas (Wailings in the Forest) was selected under the Bright Future non-competition section of the 47th International Film Festival Rotterdam in 2017. It won the NETPAC Jury Price award during its World Premiere at the QCinema International Film Festival held in Manila Philippines in 2016. Recently, the film was given a Special Newcomer Award at the Internationales Film Festival Mannheim-Heidelberg in Germany in October 2017. Fiola is the founder and festival director of the Ngilngig Asian Fantastic Film Festival Davao, the first fantastic film festival of its kind in the Philippines. His previous works include the film Sonata Maria, which won Best First Film at the Young Critics Circle of the Philippines 2014, and several short films, which have been exhibited in various regional film festivals. (from Kaleido Asia Collaborative Film Program Southeast Asia and Japan 2018 by Jay Rosas).

During the early 2015, I worked on an experimental documentary film. It was during the early phase of its production that the conception of "Wailings in the Forest" was developed. On our first day of shooting in Mindanao, the southern part of the Philippines, I was fortunate to have listened to a wonderful fable told by a former rebel commander. He seemed to have mastered the art of telling the story of his Moro ancestors, passed on through a lyrical poem sang in their native tongue to each generation before it was written in Arabic in the 50’s. The first part of the fable really lingered in my mind. It is the story of the origin of their clan; how their first father was impassioned to wake up every night just to fall in love with a beautiful nymph, which only his eyes can see. To others, the nymph appears as a mere pig.

Eventually the story flourished beyond what I could imagine. Until “Wailings in the Forest” was produced, inspired by that wonderful fable.

Though “Wailings in the Forest” is a different story, I think it represents cultures beyond that of the Moros', for boar hunting is a common practice of the Lumad (the indigenous people in Mindanao), such as that of the Matigsalug tribe.

“Wailings in the Forest” had its international premiere at the prestigious 46th International Film Festival Rotterdam. I commend the filmmakers who, for 17 days, over 400 hours, roamed and braved the rainforest of Maharlika—one of the last forests in Mindanao—to capture beautiful and untamed stories that nature has provided us. With the blessings of Manama (god) and the guidance of the tribes people, the Wailings in the Forest lives on as we share it to the world. 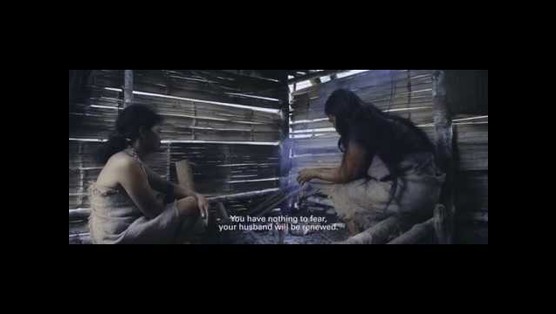