A sixteen-year-old girl must save her younger brother from the dangerous reality of their father's sudden mental breakdown.

His documentaries have been seen at the Angelika Film Center, Film Independent: Los Angeles, Phoenix Art Museum, dA Center for the Arts, Arizona State University Art Museum & LUX Scotland. Online, his artwork & design has been featured on Buzzfeed, The A.V. Club, Gawker, Fandor, Boing Boing and his animated documentary The Sandwich Movie was named a Vimeo Staff Pick in 2010. On television, his work has been shown on PBS.

Of his short film Fan Mail, Jonathan Kiefer of the San Francisco Film Critics Circle called it "One of the best shorts of 2009." Amy R. Handler of Moving Pictures has described his filmmaking as "Brilliant...fragile & hypnotic," and Sundance Award-winning director Jay Rosenblatt described Christensen's Empty House as, "Evocative...it does what many short films fail to do, makes you wish it were longer."

Christensen lives and works in Phoenix and Los Angeles.

I have always been engaged with the concept of interpretive memory as it relates to filmmaking. Like most editors, we all choose what we want to remember and what we'd rather forget. We constantly interpret our past. The process of our minds parsing which details are treasured, and which ones are scrubbed away either through force of will or by self-preservation, is an ephemeral one that leaves no easy answers.

I have been the sole custodian of my own visualized past with my prior films, creating surreal, family narratives using the mechanism of experimental documentary. With my work, there was always a sense of ease and playfulness, due to the familiarity with the subjects, obviously. The resulting portraiture was endearing but never solemn or deferential. With "The Duel," however, I felt a sacred duty to honor Lili Taylor's experience as a young woman struggling to reach her father in the midst of a mental health episode by remaining completely faithful to her narrative by treating it as a studied examination of crisis.

Sowing together the bifurcation of the experimental documentary form that I had grown accustomed to over the years with the sobering clarity of Taylor's narration was an invigorating challenge - and one that I feel resulted in a more balanced piece that I am humbled to have been given the chance to develop. 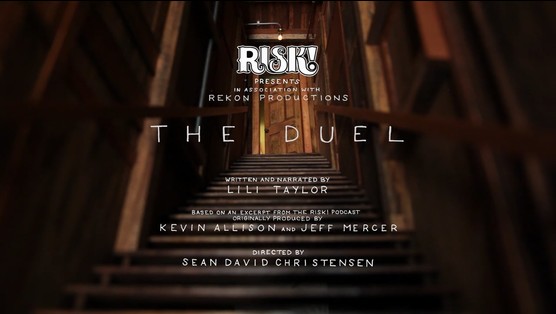