Nick Morano has a comfortable desk job at the Department of Homeland Security monitoring immigration targets. When the Trump administration suddenly changes the game by declaring a war on immigration, Nick now must choose to work for this new system or against it.

LA OPOSICIÓN explores immigration policy under the new Trump administration. When officers for the Department of Homeland Security are ordered to aggressively monitor immigration targets in the USA, they start to question their own culpability in the new system.

Director / Writer / Actress Zoey Martinson works at the crossroads of Arts & Advocacy, starting as a humanitarian aid worker with refugee's in West Africa, London and USA/Mexico border. She has created and directed performances in Ghana, South Africa, Berlin Germany, Ecuador, New York City, Los Angeles. Co-Founding Artistic Director of Smoke & Mirrors Collaborative and 2016/17 Directing Fellow at Manhattan Theater Club & Dramatist Guild Playwriting Fellow, Artistic Mentor Fellowship at Lincoln Center through the Rockefeller Brothers Fund. She is currently developing her new piece The Black History Museum According to the United States of America at HERE Arts Center in NYC. As a writer her play Olityelwe (formally Ndebele Funeral) won the Overall Excellence Award for Best Play in the NYCFringe Festival, then went on to run Off Broadway, South Africa, and the Edinburgh Fringe Festival, Scotland. Her work has been nominated for Amnesty International Freedom of Expression Award and she has been featured on BBC World Service. She has been published in five anthologies. Skype Duet that she co-created and directed won the 100 Grand award at the HAU2 Theater in Berlin, Germany. The production then toured through out Europe, Australia and site specific venues in New York City. As an actress she has performed Off-Broadway and regionally. She was the acting coach for Netflix 'Beasts of No Nation’ and upcoming feature film 'Skate Girl'. MFA from New York University, TISCH.

Two years ago I found myself traveling throughout the United States conducting interviews for a play I was writing on immigration. From the Humanitarian Aid camp on the US/ Mexico boarder, to court proceedings, and detention centers. I acquired stories from judges, lawyers, advocates, undocumented, and migrants crossing in the desert.

So when executive producer Brian Hastert asked me to write and direct a short film for his senior Pace University students after the election, I was excited to meet these young actors whose concerns and impressive talent inspired the short film 'La Oposición'. They expressed their fear about the future of this country, their student visa’s, their friends and family.

Growing up in a predominantly immigrant community in the USA this film is my response to the recent election and how this country is redefining an identity around a hostile narrative towards immigration. This film is a brown woman’s response to her country of birth. My love for my country and my continual battle within it’s system to be seen as equal. This country’s relationship to oppression. We go from outwardly oppressing people of color to outwardly targeting immigrants. When do we step back and address this country’s continual need to oppress?  Our refusal to look at the system we have in place that benefit’s off of that oppression, that uses it for economic growth, as fuel. What kind of country would we be without passive participation in the system that uses incarceration and fear to incentivize the American Dream?

La Oposición delves into the whispers of humanity at the core of the criminalization of the word immigration. I believe an audience can hopefully find a piece of empathy as we follow an officer at the Department of Homeland Security as he starts to question how he fits into the system that he is directly benefiting from. I continually question my own passive participation in that system as I continue to carve out a path for myself. 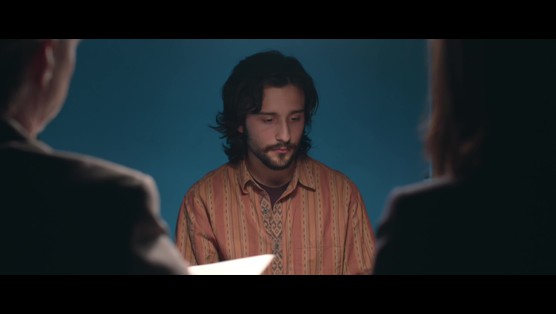