This is an improvisation film with non-actors, where each participant received a mysterious script and instructions that they cannot share with each other. This is the only rule, and everything else is allowed, whether or not the camera is filming. This was an experiment of capture realism in film.

In Film, everything is a lie. Everything is made for the camera to see; everything is a performance. However, in the absence of a director and a screenplay to follow, would it still be a lie? What would it happen if only the environment were planned, but everything else remained unknown?

Catarina César (or Catarina De Cezanne) was born in Moita, Portugal. She has been working in Europe, UK and the USA and is known for her work, as a Screenwriter, in the Production and Continuity Department, after starting her career as a production assistant for the TV series "Serramoura", season 5.

This film was made in less than 4 hours, in a small cabin in Karlstad, Sweden. The project was part of a Youth Exchange activity.

Dialogues, Story, Background, Conflict. Everything was hidden from our actors and cameraman.
There were no rehearsals, and they had only 3 rules: - Do not share with the others what you will do or talk about, speak English, and do not leave the house.

Our main purpose was to capture honest reactions from the non-professional actors in a multi-lingual environment (Polish, Spanish, Portuguese, Italians, Lithuanians, and Romanians) who never have performed nor rehearsed the scene before, were never aware of what the conflict was, which lines and dialogues would the other actors have, nor what would happen at the end of the film. All they knew, was that this was a film about social isolation and Gina’s feeling of being left behind by everyone else who have found better paths in life while she gave up to a life of loneliness in the middle of nowhere and that they were suddenly invited to her party, after years of absence.

The character’s backgrounds would be different for everyone, they did not know who would enter the house to be filmed and participate with them, as well as they did not know their story, or what would they have prepared, if anything. The camera is no longer a soulless observant, but a subject whose role was to film without planning or rehearsal, because, as well as the actors, he did not know what they would talk about, nor was going to happen.

Because most of the film is happening with no cuts, the first minutes are unsettling. Our amateur actors believe everything depends on them to drive the story; nobody believes that something out of themselves would interrupt the performance they had planned in their minds. Along the way, their body language change, as well as their facial expressions too. The embarrassment was real, the mumbling, the feeling lost, the curiosity, the claustrophobic silence, the mistakes, the language barrier, the struggling, the laugh, the nervousness, the yelling, the...

We have found that realism is a feeling that lives in peoples’ eyes, just like fear, anger, despair, and sadness. “The Party” was made to capture this feeling. 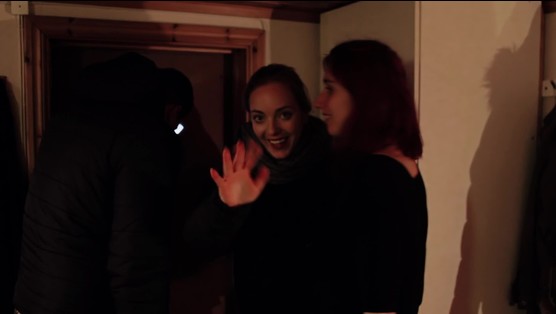