To think you could take a train from Boston, New York, or other big cities beyond, and be dropped off in the middle of the Maine wilderness, several hundred miles from anywhere…right at the water’s edge of 40-mile long Moosehead Lake, then take a steamboat to a grand 600-guest resort hotel in the midst of the Maine woods. In 1900 you could do this. Thousands of people escaped the hustle, bustle, and heat of the cities for the wilderness of the Moosehead Lake Region – for the same reasons they do today.

Now imagine over 25 steamboats cruising Moosehead Lake ferrying tourists, sportsmen, businessmen, and cargo, and even towing logs. What happened to them?

While we can’t go back in time, we can visit the underwater remains of the steamboats, and tell the stories of Maine people whose lives were impacted. By combining high-definition underwater video, oral history interviews, and archival images, this historical documentary tells the story of the steamboats on Moosehead Lake and their key role in the Maine logging and tourism industry. Produced in partnership with the Moosehead Marine Museum.

Ryan spent his childhood on majestic Moosehead Lake in Greenville, Maine where he developed a life-long passion for boating, scuba diving, and adventure sports. He attended Emerson College in Boston where he studied Technical Theatre. Ryan is a self-confessed A/V nerd, and after college taught himself video editing and production. Sunken Steamboats of Moosehead Lake is his debut film. One of his goals is to sail the entire coast of Maine and scuba dive the many shipwrecks that lay on its rocky shores. Ryan works full-time at home as a Voice User Interface Designer. He resides in the Portland Metro area in Westbrook, Maine.

I took up scuba diving with the goal of exploring what is beneath the surface of the dark waters of Moosehead Lake. I guess I lucked out, because just like the stunning vistas Moosehead offers above the surface, this "ocean in the forest" also hides some amazing treasures in its depths.

The first ever dive I did in Moosehead Lake was on a 'wreck' we know as the Kineo on the north side of Steamboat Point. The hulk lies next to the remains of the old shipways. We dove down the steep slope. The old wooden pilings plunged into what seemed like an abyss. It is eerily dark at 40' in that part of the lake and I was just blown away...and a little creeped out when the remains popped out of the darkness. I could see evidence of lots of burning and charred wood along with a rusted steam engine with control handle still in place. My mind ran wild wondering about what happened to this boat. Why was it burned? What was it doing here? How many hands had touched that engine? What were the experiences of the crew and passengers of these boats? I surfaced after that first dive, with eyes as big as a tea saucers. It was a that point I decided this needs to be shared.

Liz McKeil, Executive Director of the Moosehead Marine Museum (this non-profit operates the last remaining steamboat "Katahdin" for sightseeing excursions) saw some of my rough GoPro dive videos I made for YouTube. We connected and decided to make a short video about some of the wrecks I was diving on. The short video concept evolved into the only feature-length documentary film to provide an overview of the steamboating history on Moosehead.

History is so much easier to digest when spoken directly by the people who were involved in it's making. The 'narration' in Sunken Steamboats of Moosehead Lake, comes directly from the oral history interviews I conducted with people who had first hand involvement with the steamboats. I want the audience to hear this history in the words of these individuals instead of dry narration.

Having grown up in the Moosehead Lake Region at a time when the area was in some state of economic decline, I've always been awe-inspired by the boomtown prosperity that once existed. Moosehead is a place where tourism and industry have aligned and shared resources for well over 100 years. I hope this film captures the grandeur of what once was and inspires others like it has me. 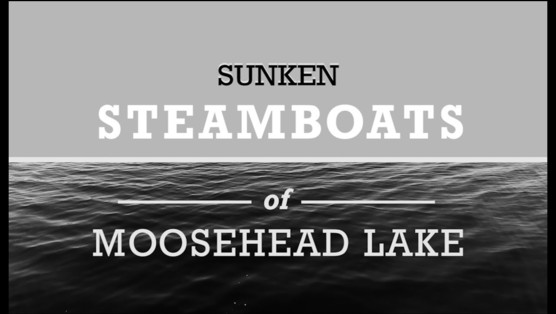