Redemption: Wine and Prophecy in the Land of Israel

After almost two thousand years in exile, Jews returned to their ancestral homeland and, in 1948, established the State of Israel. In 1967, when Israel conquered the West Bank from Jordan, Jews rushed to return to their Biblical roots in Judea and Samaria. Despite decades of bitter conflict with the resident Palestinians, Jews continue to settle these contested territories. Some regard this return as the realization of Biblical prophecies, as part of the process of redemption. This film attempts to understand the beliefs and motivations of the settlers through the stories of the region’s winemakers.

Ian McGonigle was born in 1984 in the town of Drogheda in the Republic of Ireland. His father was an electrician and his mother ran a pre-school. He grew up in the small town of Skerries in North County Dublin where he spent his youth racing sailboats. He was educated at Skerries Community College and at Trinity College Dublin, where he studied the sciences. Upon graduation, he went up to King’s College Cambridge for a PhD in biochemistry where he became distracted by anthropology, leading him to a masters in anthropology at the University of Chicago, and a second PhD, in anthropology and Middle Eastern studies, at Harvard University. His dissertation, ‘Genomic Citizenship,’ was awarded the Association for Middle East Anthropology dissertation award and became a book published with MIT Press. In 2018, he took up a Nanyang Assistant Professorship at NTU in Singapore with a grant to launch a ‘Science and Society’ research group. He is currently doing ethnographic work with religious Jewish winemakers in the contested territories of Israel/Palestine.

“He lifted up the bottle and studiously examined the label, a gentle squint revealing his disapproval. The wine was from the contested territories. While spending a year in Israel doing anthropological research for my PhD on human genetics and its role in national identity formation, I realized during a dinner party that in Israel wine is both a political and a religious issue. Wine is an important part of identity formation and wine from the contested territories – what some call Judea and Samaria, or the West Bank – is a hotly divisive issue. Some Israelis see the planting of vineyards in this area as an illegitimate and exclusive claim on the land at the expense of the Palestinians, while others see Jewish return to the area as a realization of ancient Biblical prophecies, as part of a predestined redemption. After I finished my project on human genetics, I decided to visit these wineries and interview the winemakers to better understand their beliefs and motivations for settling these areas; and in particular, to get a sense of the symbolic and spiritual importance of wine in their lives. A few years later, after I started a job as an Assistant Professor of Sociology in Singapore, where my research was supported with a generous start-up grant, I began learning about photography and film, leading me to return to Israel to interview the region’s winemakers on camera. This film is the product of those trips and I hope that by understanding the beliefs and motivations of the winemakers, we may better understand the complexity of this fraught region and also learn something about the ancient and important role of wine in religious Jewish life.” 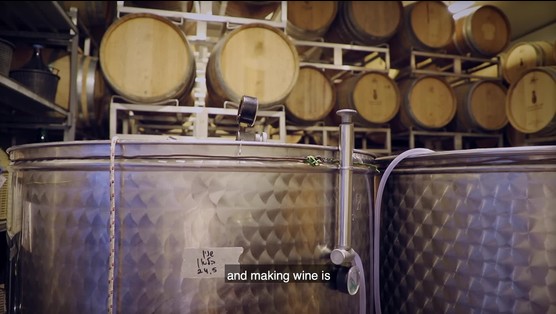