Sarah wakes up in the middle of a wood next to the blood soaked body of a guy she met in a club a few hours earlier, but that is all she can remember. Evidence suggests the man may have tried to attack her, but when she finally manages to piece together her fragmented memory, she discovers the truth is far more chilling.

Writer/director Derek Boyes is a graduate of the National Film and Television School. His spellbinding fantasy short, The Happiness Thief, premiered in competition at Cannes in 2004 and went on to play at film festivals across the globe.

Derek has directed a variety of shorts for Screen South, the BBC and the Bfi while developing a slate of imaginative feature films. His first feature-length screenplay Blackout, a gritty micro-budget thriller, was optioned by Ipso Facto Films in 2009 after it beat over two hundred feature projects to the final of The Big Pitch scheme.

Having stepped back from the film industry to bring up his daughter, Derek was selected for Raising Films' CLOSR programme - a networking and career development platform for filmmakers who are also parents or carers.

Through this initiative he was able to reconnect with industry peers and form the Guerrilla Filmmakers Lab as an innovative way to re-launch his filmmaking career and continue to produce regular low-budget work, while expanding his developing feature slate.

Last Night is a three-handed thriller. It is the first film to be produced through the Guerrilla Filmmakers Lab, a filmmakers’ collective, where local filmmakers can pool their knowledge, resources and skills to make regular low-to-no-budget films as a way to experiment with new innovative forms of filmmaking without the worry of failure. I set up the lab in response to a growing frustration that I wasn’t able to make films as frequently as I wanted.

By flipping my original 1996 short film premise on its head and making the protagonist female and the victim male, I was able to explore how gender might affect story, encouraging further debate on equality in cinema.

The film was shot entirely on an iPhone 6s, using Filmic Pro (Version 6), the Mavis app and Moondog Lab's anamorphic lens. 99% of the footage was handheld using either a pistol-grip mount or the DJI Osmo Mobile gimbal. We filmed over three consecutive nights in October 2017, on location in and around Maidstone in Kent and at Harrison’s Rocks in East Sussex, England.

This was a truly run-n-gun style production, where a minimalist crew meant I had to take on multiple roles as writer, producer, director, editor, cinematographer and even apply some sfx make-up. I sourced my four other crew members from the UCA’s Television Production course based at Maidstone Television Studios. They assisted me with sound recording, lighting and epk material. Casting was completed through Mandy.com where shortlisted actors were invited to audition via smartphone video submissions.

For more in depth information on the film please download the press kit in the right hand column. 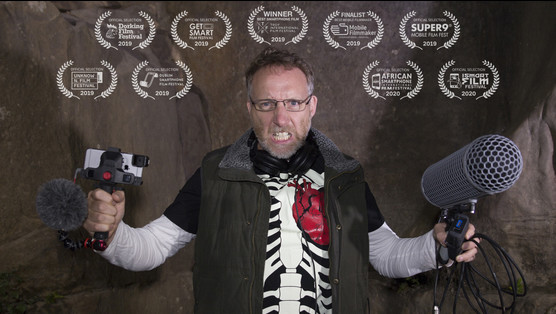