The film explores the way in which Hindu pilgrims and their families stage a distinctive politics-of-care, while they anticipate and create the possibility of Moksha for their dying relative in Varanasi, India's holy city. This research examines audiovisual ethnography as it facilitates a performative space that allowed me and my interlocutor Shiv to navigate the holy city and improvise different possibilities for his mother’s Moksha during his ten-day stay in Varanasi.

Rajat Nayyar is a visual anthropologist and currently a PhD researcher at Department of Theatre, York University. He works as a co-editor of the Performance Ethnography section at the Centre for Imaginative Ethnography (CIE). His research interests are directed towards verbal performative traditions, everyday forms of resistance, collaborative fiction filmmaking, anthropology of dying, death and politics of care.

During the ten days of research with Shiv's family, I realized that Moksha is an embodied knowledge of care that is transmitted through generations in the form of religious stories, and is grounded in the everyday adjustments of making it a possibility (as future), rather than a philosophical argument (Jackson 2014). During our walks with the camera through the labyrinth-like network of narrow streets, we began to improvise small, daily projects. These projects represented Shiv’s distinctive politics-of-care, for they heightened the possibility of his mother’s Moksha. In attending to such unintended imaginaries (Kazubowski-Houston 2017, 115), the camera attuned us to the affective and embodied dimensions of Shiv’s politics-of-care. This approach to audio-visual ethnography further allowed Shiv to take an active role in setting the direction of the film and impacting his family’s future. Based on our critical intervention within the everyday performances of the possible, I re-consider the anticipatory and the creative potential our research, and how it facilitates collaboration and reflexive creation of ethnographic knowledge. 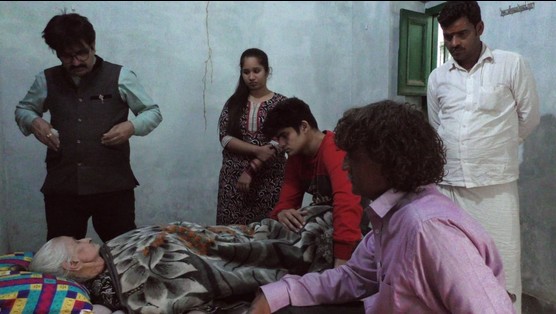