16.06.20: Perth, Scotland. Paul Thompson, a 70-year old amateur radio operator, catches a signal from the International Space Station. As he listens to the astronauts comparing life aboard the station to life in lockdown, Paul day-dreams of escaping his home.

Luka is a self-taught filmmaker and photographer with a multi-disciplinary background in producing, writing, editing, and just about whatever needs doing on set. Though still learning the craft in many ways, he has been involved in about 20 short-film/video productions, 2 feature film and TV drama productions, and has also written for a number of independent film publications. While currently working as a trainee assistant director, he is writing his first feature film entitled "Cleaner", a psychological drama about social media content moderators.

Though a seasoned operator can come across the ISS signal on a fairly regular basis, the concept of a chance discovery from a stratospheric source, from the confines of one’s home, is a tremendous opportunity for creating a story that portrays the eternal adage of ‘looking up’ in desperate times. And during the 2020 pandemic, this is what I found from Paul Thompson, a 70-year-old amateur radio operator from Scotland.

Originally, I had planned to make a short documentary which would explore the two sides of the debate about manned space travel - i.e. those who believe space exploration is a gateway for technological progress and a greater existential perspective, and those who believe our course of action should be to ‘fix’ our own planet before focusing on space colonisation. But as the world became much quieter in 2020, logistic and aesthetic considerations had to be re-adjusted. A standard ‘talking-heads’ format was discarded for something more visually evocative and compelling.

In effect, our goal is to create something between the constructs of fiction, and the intimacy of documentary; the real ISS transmissions, over a re-creation of Paul’s activities on the 16th of June. All to portray the source of hope that a man found from an astronaut passing somewhere above the clouds. 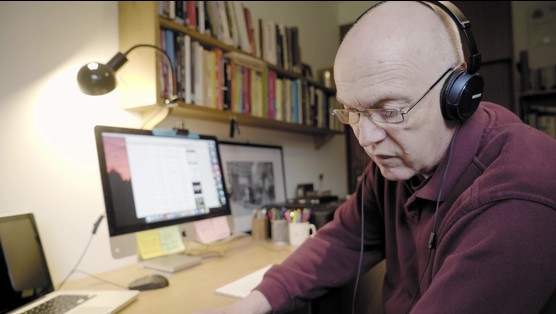