A sleep deprived mother grabs the ball, taking a fast break from her screaming baby.

Yocheved Pianko Feinerman is a filmmaker based in Reut, Israel. Yocheved is currently a full-time student at Ma’ale School of Film and Television and is set to graduate in late 2024. Pianko- Feinerman directed several short films, most notably, “Hold the Ball” in 2021, recognized by several International Film Festivals. Her dream is to engage global audiences in #herstories #ourstories. Yocheved is currently building her body of work as a writer and director with material curated (directly and indirectly) from her primary role as High Energy Mom to four spirited children, an active Labradoodle, and a wife to a very normal husband.

Shh. Shh.
Please.
Emmy begs her newborn baby. Emmie loves her new baby. She needs the baby to stop screaming, just for a minute. The baby had not stopped crying since she pushed him out, ending over twelve hours of labor. Morning. Night. Afternoon. There was no break from his crying. Emmy had tried everything. Emmy had spoken to everyone. Nothing helped - the baby continued to scream. Put the baby in the stroller, Emmy's mother told her. Babies need fresh air. You need fresh air. Go to the park. Desperate, Emmy follows her mother's instructions. This was a good idea, Emmy says, trying to block out the sound of crying. Emmy scans the park. Her eyes stop and focus on relaxed mothers. Chatting. Laughing. Cooing to their happy babies. We will meet other Mommies. You will make new friends. The baby responds to her excellent nature with louder screaming. Shh. Baby.
Shh. Emmy says - careful to use her nice mommy voice. Are you dirty? Is that why you are crying? Let me change your diaper. Please shh. Stop crying. We are going to meet new people. People don't like screaming babies - you will be a good boy. Right - Please. Yes. My good boy. Emmy says, snapping the baby's onesie. Emmy grabs the diary diaper from the bassinet. Slam Dunk - she still had it. And the Crowd Goes Wild Emmy looks around - no crowd cheering. The only one going wild was the baby. Shh. Mommy will feed you.
Shh.
Emmy pushes her stroller into the park. Let's find a seat. Shh. Emmy looks at the first bench - at the cluster of women. They don't notice her. They don't make room for them. That's okay. We will find other baby friends. Emmy spots a mother alone on a bench - her stroller in front of her. Plenty of room for Emmy. Emmy approaches the empty seat, watching the other mother expertly reach into her stroller, consoling her crying baby. Emmy smiles at her. You - you understand. The other woman briefly meets Emmy's eyes, frowns at Emmy's stroller and the sound of screaming. She looks Emmy up and down, shaking her head at Emmy's stained dress. The woman grabs her diaper bag, placing it on the empty part of the bench. In response to the rudeness - Emmy's baby screams louder. Emmy is desperate. She needs to stop the screams - to feed her child. There on the basketball court - there is plenty of room. Emmy pushes her stroller onto the basketball court. Shh. Shh. She begs the baby while checking out the skills of the ballplayer. Emmy parks the stroller by the half-court line in the middle of the court. Emmy for her nursing cover - dumping the contents of her diaper bag on the court. Shh. Shh. The player shoots. Misses. The ball bounces off the backboard. Flies through the air. Lands. Right by Emmy. Emmy reaches for the ball. Dribbles. She shoots.
Slam Dunk.
Nice Shot. The young ballplayer says and invites Emmy to join him on the court. Me? Emmy asks. Are you sure? Emmy jogs onto the court. He passes her the ball. Emmy's hands instinctively grab the pass. Emmy dribbles. Emmy shoots. Swish. Emmy is playing. Emmy is laughing. Emmy is guarding him.
Crying. No. Emmy says. No. Not now. Not Now. Shh. Stop screaming. Stop stealing my life. I need a moment to myself. The baby cries louder.
Emmy laughs.
Emmy holds the ball. Emmy shoots. A brick. The brick bounces off the backboard. The brick flies through the air. The brick hits the baby. The screaming stops. Emmy lays down. Closes her eyes.
Sleep. 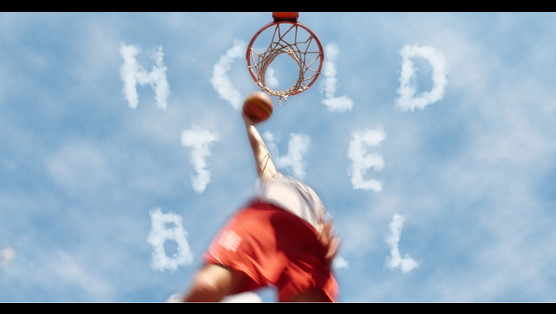