Shot over the course of their actual pregnancy with leads doubling as 2-man crew, Paula and Charlie document their impending parenthood during a time of extreme political division. Their heads remain in the sand about the greater world around them until it upends their privileged life. Now they must navigate the loss of a loved one, the destruction of their home, and the ruins of the health care system at their, and their nation's most vulnerable moment.

Paula fled St. Louis via the pageant circuit that all 5’ of her had entered as a joke and parlayed the crown she won into multiple internships. She spent stints in London and NYC before settling in LA and quickly began hyphenating with short films and web series, initially as a way to create work for herself and her friends as actors. She fell in love with the additional super-storytelling-powers work behind the camera grants one and won multiple awards along the way. This is her first feature and the first time she's used quite so MANY hyphens simultaneously (directing,-story by-wardrobe-locations-catering-makeup-camera dept-sound-producing-acting-annnnnnd becoming a mom).

Paula is an actor, producer, creator of two tiny humans, and founding member of the 5'2" & Under Club. See her work in Disney's Bunk'd, Resident Evil 7, Doc McStuffins, The New Adventures of Peter & Wendy, Barbie Life in the Dreamhouse, dozens of commercials, and more. Follow her adventures online at OfficialPaulaRhodes.com.

Talk about a Labor of Love (pun intended)!
What started out as a way to keep my creative sanity as my belly grew and auditions dwindled, developed into a peek through a thinning veil of possibility as America collectively pushed toward a dystopian ledge. As I was seeing the term "Civil War" tossed around more frequently in social and mainstream media, I realized people, especially men, weren't taking to heart all that it entailed. Women, in general, tend to not choose war, and as my impending motherhood grew closer I truly began to grasp why. As we made our way to various states to film protests (the RNC in Detroit, Women's March in DC, various events in Los Angeles) I felt called to tell this story and humanize some of the effects the flippant calls to arms seemed to be ignoring. Because of when we filmed, I found it fascinating when showing friends the footage that they, depending on their own various political allegiances, often assumed our characters were in their camp even if that hadn't been our initial intention. The result, however, was that both "sides" can relate to us and hence go along on the journey and examine the hard questions we so often ignore. My hope is that it leads more of us to the realization that to keep our freedoms we must stay educated and engaged, and that choosing civil war shouldn't be an option.

I'm beyond ready to meet this "baby" of mine, I think the world could really use her now more than ever. I'm thrilled that she'll also serve as an inspiration and example of what one can do as a storyteller even when your world shrinks. 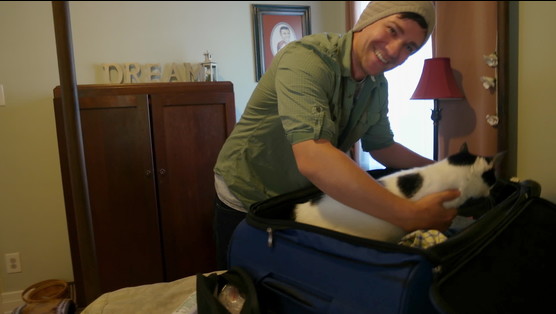