The nightly view of a resort beach, looks like an abandoned, dystopic scenery, full to the brim with trash.

The beach janitor's flashlight randomly falls on a young woman that lays in the dark taking it easy sipping beer. She decides to head towards the water for a night swim, leaving her can trash behind without a second thought. In the janitor’s head, an imaginary battle unfolds.

The woman gets entangled in fishing nets made out of pure light. As much as she struggles to brake free and stay afloat, the more she gets surrounded and choked by trash, luminous trash projected on the sea surface, in the cleaner’s imagination.

Akrivi Kollia is a film director, script writer and theatrologist from Athens, Greece, with a Ba in Theatre studies, in the School of Fine Arts of the University of Peloponnese and MSc on Fine Arts in Digital Arts.
Her varied style of filmography consists of 8 short films, video art, video dance, video clips and documentaries. She has also directed various TV and theatrical shows.
Her short film "Poliorkia" (The Siege) has won the "Best Foreign Language Film Award" in the 2016 ПЕРЕРЫВ НА ВОЙНУ Festival of Saint Petersburg in Russia. She's a founder and curator of the Cinema Department of the Greek Cultural Association for Art & Nature "NARTURA".

"ConScience" is a social comment on ocean and sea pollution.
The plot alternates between the realistic and the imaginary,
focusing on this major enviromental issue, its consequenses
and how it affects or should affect our conscience and stance.
The movie unravells through the eyes of a beach janitor.
He represents the awaken person, the one that selects anactive
role in dealing with the destruction of our habitat and wants to fix it, but nevertheless despairs by the indifference of most people and the very sense of vanity that comes with that understanding. 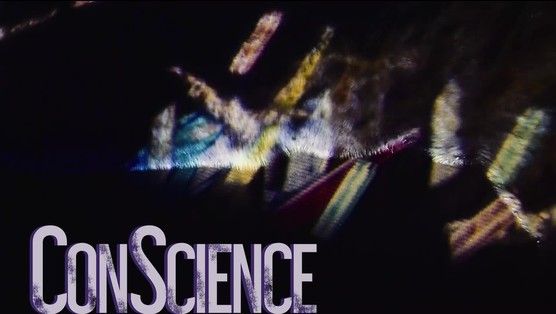