Elijah and Billy are two trans bros who just happen to enjoy jerking off together -- in a straight way! But when Billy starts dating a woman, Elijah must come to terms with his feelings for Billy and his own burgeoning homosexuality.

Raunchy, campy, and heartfelt, "Bros Before" is a second puberty coming-of-age story saturated with sex, drugs, and hyperpop.

I’m a trans filmmaker and organizer based in Chicago. I make narrative, documentary, and music video work that grows organically out of my involvement in community organizing, multidisciplinary art spaces, and counterculture.

My work has been selected for film festivals around the world including Inside Out Toronto, Indie Memphis, El Festival Mixx and more. I have collaborated on the music videos of some of my favorite artists, which have been featured in publications like AFROPUNK, Flood Magazine, The Deli Magazine, Post-Trash, and the Chicago Tribune.

My projects have been supported by institutions like the Illinois Arts Council, Chicago Department of Cultural Affairs and Special Events (DCASE), Chicago Digital Media Production Fund, Chicago Parks Department, and The Film Fund.

I graduated from Oberlin College in 2017 with a B.A. in Cinema Studies and was named one the 2020 Chicago Film 50 by Newcity Magazine.

**Previous work has appeared under the name Harley Foos

Quite frankly, I just wanted to put people like me in the kind of movie I want to watch. I have never seen a film about trans men that portrayed us as sexy or was comedic much less both at the same time.

Though trans visibility is at an all-time high, our stories are caught in the twin strangleholds of respectability politics and assimilation. I’m not interested in being nonthreatening, explaining myself, or pandering for basic decency. I want to tell stories about and for trans people who are freakish, flawed, broke, gender nonconforming, gay, complicated, weird, and capable of being wrong.

I am simultaneously inspired and frustrated by the idea of “queer representation” and the way it’s recently unfolded in the cultural sphere. On the one hand, the legacy of underground queer cinema is my greatest inspiration as an artist. I can directly credit my drive to make films with seeing campy, goofy, grungy, self-reflexive work by the likes of John Waters, Gregg Araki, Cheryl Dunye, Bruce Labruce, Curt McDowell, Vaginal Davis and others. And while I’m excited that queer stories are becoming more mainstream, I’m worried that what has historically made queer cinema unique (and interesting to me, personally) has largely fallen out of fashion in favor of more normative modes.

This film is my attempt to address the gap between underground queer film traditions and contemporary trans realities. I'm harnessing all the panache of the trans cultural vanguard to give the transgressive punk film a long overdue update for the modern era. 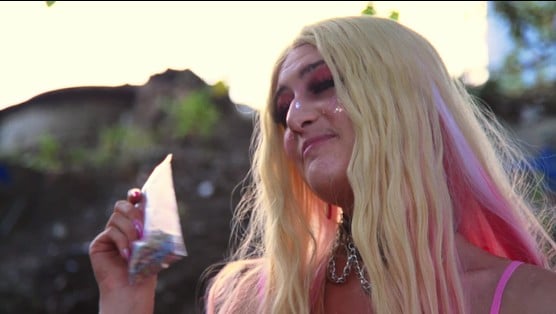