What is behind probably the most successful techno-party nightlife of all Europe? "Au Revel" suggests an answer to the question.
It is winter 2015, in the Eastern part of Berlin’s city centre. Active at the time of the German Democratic Republic, a restaurant now in disuse is planned to be destroyed soon. An underground group takes it over and decides to organise there 5 parties. The initiative is called: “Dein Drama in 5 Akten (Your Drama in 5 Acts)”. Recreating an ascensional climax, the 5 events follow in sequence: “The Vision”, “The Seduction”, “The Touch”, “The Confusion” and “The Ecstasy”. A huge amount of work is done to convert the huge restaurant into a suitable venue and all in a ‘Do It Yourself‘ way. The walls are soundproofed, a few bars and a dance floor are built, whilst the whole place is constantly redecorated according to the theme of the next upcoming event.
The group of artists grows larger with everyone feeling more and more united through their journey.
The awakening comes right after the last event: ‘The Ecstasy’.

Sieva Diamantakos was born in 1980 in Rome and grew up in Liguria close to Genoa. He started filming while he was attending the university in Bologna and Amsterdam. After the graduation he moved to Genoa where he worked as cameraman for the ferry company 'Costa Crociere'.
Later he became a member of port-royal, an emotional electronic band that inspired his fantasy. He developed a poetical visual language which was an inseparable part of the port-royal audiovisual show. For seven years he toured with the band all around the world, especially in the Eastern countries as Russia, Ukraine, Serbia etc. Despite this intense collaboration, Sieva deepened his skills in many branches (commercial and independent) as director, cameraman, editor and VJ. Having developed a strong interest for the Eastern countries he decides to move to Kiyv. There he worked on the documentary “Postcards from Ukraine” that depicts the political and social crisis in Ukraine.
After moving for the second time to Berlin he founded with Natalia Fentisova a start-up (Blitzar Media) specialised in video-audio products, from trailers to documentations, image-films and commercials.
In Berlin he realised his second feature documentary “Au Revel” about an illegal techno club in the center of the german capital, scheduled to come out in 2019.
Sieva Diamantakos' work is deeply influenced by philosophy (mainly existentialism), sociology and the interaction between human and technology. His style of filming consists of both a visionary and emotional approach. He currently lives between Genoa, Kyiv and Berlin where he works on his third feature documentary.

I intend the process of documentary filmmaking as a way to personal growth. For me, for the characters involved and for the audience. If I manage to shift someone's perspective on things in some way, I know that I made something meaningful. 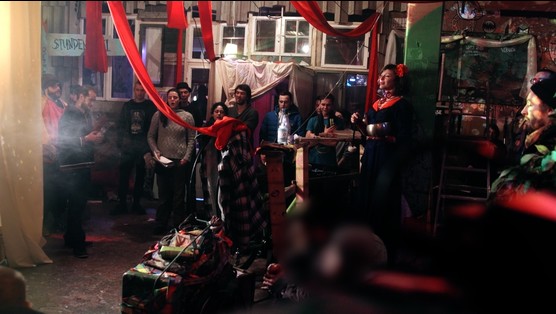