Sundae Ennis has to give a presentation to a potential client from work. But her biggest fear in life is public speaking. She wakes up in a panic, rushing to the meeting, listening to her mother's encouraging voice note. But when she arrives at the council office, she soon realizes things are not quite normal. The secretary who welcomes her to the office makes odd comments which throw Sundae off. As she enters the boardroom, her anxiety increases. She is not sure if it is her imagination or if the board is playing a game with her, but she tries to continue with her presentation. She questions her sanity and her sexuality. She finds herself drawn to the ladies in the meeting, which surprises her. She finally loses her mind, finding herself in the middle of an insanely bizarre party with everyone dressed up in costume, and runs out of the office.

Alastair Train is a London based award-winning writer/director. His darkly comic and stylish films have been shown at festivals around the world, including Cannes, Haapsalu Horror & Fantasy Festival, London Short Film Festival, and London Independent Film Festival.

His first film ‘Osteopathy’ (2017) gave us a dark insight into the world of a struggling Osteopath trying to impress his father, while his second Short ‘All Stretched Out’ (2019) showed us the deadly risks of trying too hard at Yoga. His newest short ‘Active Imagination’ (2022) asks what’s the worst that can happen with an over active mind during a business meeting?

Currently working as the Senior Production Coordinator at the London Film Academy, Alastair is in the development stages on his upcoming feature film ‘My Life’ that he wrote during lockdown.

When I read my amazing producer Yasmine’s script “Active Imagination” I knew that this was the next film that I had to direct.

While my directing style normally plays in the darker experiences in life, like your osteopath accidentally killing you or trying so hard you rip yourself in half doing yoga, Active Imagination was a story that was just so easy to relate to.

You show up late for a presentation, your minds all over the place, you feel the nerves eating you up inside, you start vividly hallucinating…

It was this type of humour that drew me to the script, it was wacky, out there and just so fun to visualise.

I wanted to create the feeling that we didn’t know what was real and what was fake, which is why I went for a more static framed style at the beginning of the film, however as the film progresses the shots start to become more hectic bringing that chaotic feeling that our poor main character Sundae is going through to the audience.

In the end I hope this film can provide some relief to anyone who gets nerves before a presentation, leaving them safe in knowledge that you’ll never have to go through a presentation that goes this badly. 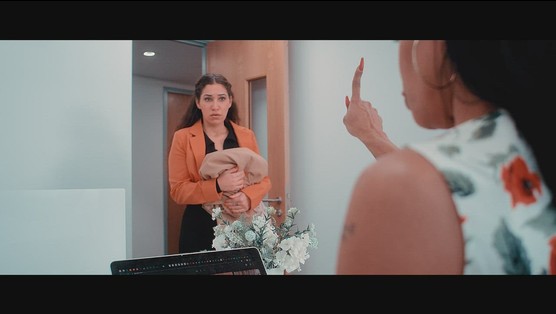