Looking Forward ("Avenir" in French) is the charming and uplifting portrait of a collective in search of meaning, in the shadow of global warming. This 26-minute documentary tells the story of a group of people who get politically involved for the first time. In an attempt to get elected to the town council, they tackle the issues of climate crisis and democracy, which threaten their Alpine ski-resort, La Clusaz.

Laura grew up in the audiovisual world and studied the art of visual expression at Lycée Saint Joseph, in Thônes in 2009, alongside documentary maker, and film professor, Patrick Avrillon. She then went to study audiovisual arts at the Ecole de l’Image et du Son 3IS, in Paris. She worked with two directors, Nils Tavernier, whose film De toutes nos forces she acted in, and Stephan Moszkowicz, for whom she was an intern in post-production of his documentary, Génération entrepreneurs, produced by Balina Films and shown on Arte Tv (France).

She specialised in documentaries, in Quebec, studying at l’Ecole des métiers du cinéma et de la vidéo in Rivière-du-loup. Alongside her studies, she landed the role of presenter and journalist of a documentary programme, called, Les Ramasseux, produced by Alambik Films and shown on MAtv (Quebec national tv). This eight-episode series dealt with the history of Quebec, through the eyes of avid antique-dealers.

Her documentary, AVENIR/LOOKING FORWARD, ©2020, produced by PVS Company and Drama Way, takes us behind the scenes of the town council elections of 2020, alongside a group of political novices, engaged in an unprecedented combat, calling for participatory democracy and genuine ecological transition in the mountain environment. AVENIR won the award best short documentary in LA Independent Women Film Festival at Los Angeles, a nomination in London Eco Festival and his selected in festivals in USA and Canada.

Her new documentary, MICHELE, ©2021, produced by Drama Way, tells the story of her mother’s battle with illness.

I’ve always found politics dehumanised: inaccessible people at the head of power, with whom I couldn’t identify. I really felt that my voice as a citizen wasn’t being heard. I’ve never felt comfortable in pyramid systems, nor have I understood the ever-widening gap between the everyday reality of a population and those that govern us. What’s the point of getting politically involved when you just don’t feel concerned, and when all political debate in the media is reduced to cock-fighting?
La Clusaz, the village where I grew up, was forever moving towards excessive and unsustainable exponential economic growth. The gap between the inhabitants and the elected representatives was getting wider, and nothing was really changing. I was fearful. For my beloved mountains, for the future. My dreams had vanished, and in their place was doubt and a secret desire to escape. My despair at what was happening in the world just made me bury my head in the sand, or rather, in my case, in the snow. I had a dilemma: to stay wrapped in cotton-wool, hoping I could withstand the bumps and jolts, or step outside my cocoon, to educate myself, take risks and defend the things which were valuable to me, starting with my immediate environment. But where to start? Then one evening, I came across a post on social media by a group of inhabitants of La Clusaz: “A team who wants to change the way politics is conducted.” This immediately caught my attention.
I wanted to watch, observe and film this group from the inside.
The next day, camera in hand, and beating heart, I joined their adventure. What interested me wasn’t their political campaign, their manifesto or their strategy, but how and why these particular people from totally different backgrounds wanted to get involved in this civic undertaking and devote all their free time to it? Valuable time in the winter season for restaurant owners, ski instructors and parents of young children. At first, they were somewhat suspicious of my motives, and so it was a slow, gentle immersion into their territory, their HQ.
I followed the daily activities of the group, through the eyes of Alexandre, the forward-thinking, passionate, thirty-year-old. His empathy and his charm helped create an intergenerational bridge between all the team-members. I blended into the scenery as much as I could, and slowly but surely, they no longer noticed my camera slowly. I witnessed the start of a movement, full of good will, if sometimes awkward. Truly endearing people, from all walks of life, throwing themselves with fervour into a battle they weren’t prepared for. They were ready to meet the challenge together and for the common good. I wanted to be right up close to their humanity, both literally and figuratively, with a warm, intimate camera, seeking off-the-cuff remarks.
As well as being touched by the political values of this electoral group, such as the issues of global warming and participatory democracy, it was their journey that I wanted to film.
Visually, I wanted to capture the complexity of the risks they were taking, the emotional fragility of victory and failure, as well the poetry of their support for each other, their sometimes child-like interactions, when they assembled and expressed their belief that anything was possible…their desire to build an attractive and sustainable future, to ensure everyone’s needs were heard, to make politics more humane and to give meaning to commitment.
I’m a young woman from Generation Y. I believe that we’re a generation torn between the old and the new world, which we don’t seem to have a grasp of. This feeling of being torn has brought about a general sense of disenchantment, and media-induced stress into which we’re drawn only reinforces our demotivation. The title of the documentary, Looking Forward, represents for me the essence of the human adventure that I wanted to capture on film: a path towards hope. This group of people gave life to my dreams once again / brought my dreams alive again. With this film, my aim is to share this joy and this note of hope. Here, or elsewhere. 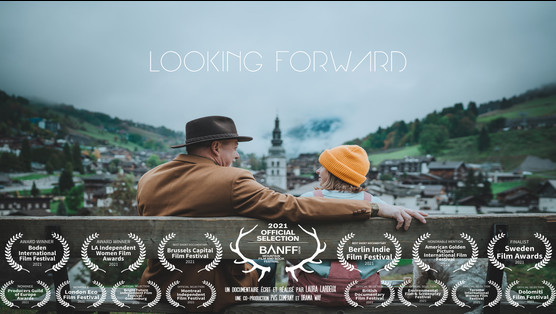