A Place for Sad Face

Set in New York City; Christine arrives to home and is led into a game by her boyfriend Jack. Together, they attempt to mourn a sudden loss and conquer racism through unconventional means.

Matthew Dunivan has written such films as Happy Birthday, Dickweed, Ode to my Father, & Dying to Get Laid. He is an Edward Albee Fellow and member of Blackbox Productions. Matthew holds an MFA from Columbia University in Acting.

Toni Ann De Noble is born and raised in Jersey City, NJ. She holds an MFA in Acting from Columbia University. She has guest starred in Shades of Blue (NBC), Sneaky Pete(Amazon), and Elementary(CBS), consistently performs Off-Broadway and recently starred in Lanre Olabisi’s A Storybook Ending, & Sharaya J’s Roomies. In collaboration with Tender Claws & Piehole, Toni Ann worked on character development, performed voiceover and motion capture for multiple characters in the upcoming VR experience- Time Loop. She performs her original pieces around NYC such as “Tony & Cookie”, “In The Meantime- a racial discovery”, and her many Odes. Her writing is a natural blend of comedy and drama pulling from her Italian-American upbringing and a desire to honor the people who made her who she is today.

After the election of Donald J Trump in 2016, I had a lot of swarming questions: What do I do? What can I do? What does this mean now for Black America? Will this ever end? Do I even believe we, as a whole, can be less racist as a society?
It was after the election, in my searching for answers, I found an article with a map of an almost entirely blue America showing “the voter turnout for millennials” I looked with hope and thought to myself the future looks bright. This is just a generational problem. Once my grandparents generation dies off, we will be better off. We will be less ignorant. It’s only a matter of time.
But then I had to acknowledge the racism in myself, in my own generation, in our current culture. In the collaboration and talks with Toni Ann, our lead actor playing Christine, I realized the evolved form of racism has become like a morphing virus, more difficult to detect, but equally if not more deadly. And through the eyes of Christine in this film, I would hope that our audience might be able to see the hopelessness for the future and in the face of the optimism from the unassuming white.
- Matthew Dunivan

The character Christine navigates through life apologizing & justifying; making adjustments in order to keep on and carry on. Something many can relate to, but do you ever say NOT TODAY?
Matt came to me and said “I want to write something and we’ll film it.” I said, “Sure, let’s do it!” I knew I didn’t want to teach someone or save anyone in this film. I wanted to start with Matt & I, our friendship without the social constraints, without the concern of the impending offensive statement coming our way. I was inspired by Cowboy Mouth, a play by Patti Smith & Sam Shepard. The way this couple communicates is unique; effective- even if only for the moment. They can always turn to “play” to dissect the issue at hand & their relationship will work if they listen and BELIEVE each other’s concerns & acknowledge their own habits.
Most times as African-Americans our concerns are dismissed, argued, derailed, or blatantly ignored. The story had to show how we make sense of such heartbreaking, haunting, exhausting, infuriating truths. When it’s all said and done, where do you feel safe to take your mask off? The sanctuary of your home? Or do you realize your solitude in the world you live...
- Toni Ann De Noble 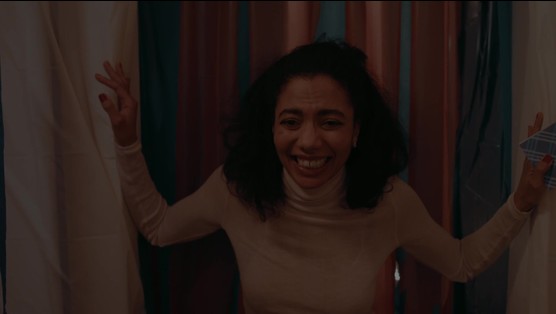