Sexual intercourse among fighters in the TPLF guerilla organization is Punishable by death!!!!!

The Tigray People's Liberation Front (TPLF) is a guerrilla fighter organization aimed at bringing down the Ethiopian dictatorial government from power through armed struggle.

Azeb Bekele is one of the few female soldiers of the guerilla during the war with the then Ethiopian dictator regime.
She was known for her fighting skills and was respected by the leaders and every member of her regiment.

The leaders of TPLF decided to send a spy to infiltrate the government so that it gets necessary information in order for them to prepare for the armed struggle.

Since the government knew that sex is forbidden in guerilla organization, the TPLF leadership decided that the spy should be a female and has to carry a believable story with her, which is pregnancy so that she doesn't get suspected.

Azeb was chosen for this role.

Even though she was against the idea of having sex and leaving her comrades before the war ends, she accepts the assignment after her leaders reminded her that she joined the army to die for freedom of her people.

Now comes the awkward moment to have sex with somebody she has never thought she would with.

And to leave for a city she has never been to.

Birhane Nigussie is filmmaker and media personality. Wrote, produced and directed three feature movies (Love & Dance, Mussie and Beza) and a short movie (The Millionaire) which is in post production.
As a media person, Birhane has 16 years experience as newspaper and magazine editor and as a producer and host of radio and tv shows. 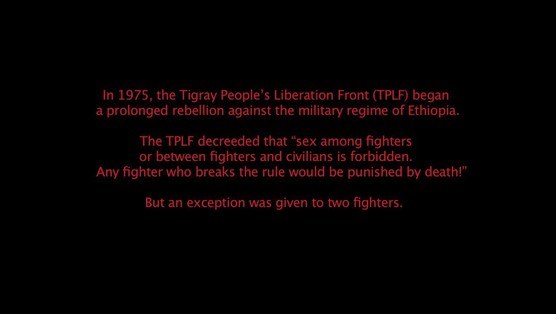