In the Name Of... is a story of guilt, redemption and revenge reminiscent of early Twilight Zone episodes. The main character is experiencing his own Dickensian visitation before vengeance appears and, while beautiful, is unforgiving, raising the question as to who, or what, his visitors were.

I'm a NYC based Actor, Writer and Filmmaker who grew up in the south of rural Indiana on a horse and timber farm from a mix of Native American and Viking heritage. The nearest kid my age lived over a mile away and after the sun went down the only entertainment was your own imagination, the rare trip to the movie theater, or a good book. So I fell in love with stories.

I devoured every book I could find and eventually got very bored with my little school library. I asked my parents if they would take me to IU (Indiana University) so I could see if they’d give a little kid a library card. They did, and it was my prized possession. A key to unlock the secrets of the universe that were surely hidden in the University Archives.

I eventually began to make stories of my own and longed for a video camera. My family didn’t have the money for one but it eventually happened through the skullduggery of a friend running a raffle at the local Shoe Carnival that I got my prize.

I loved making films and eventually found the theatre which turned into a calling, getting my MFA from the University of Florida on full scholarship and moving to New York to pursue it. Throughout all of this I have continued to write and make films and I have made use of those skills while working at ad agencies creating campaigns and commercials. I've also spent some time writing and drawing comic books which has aided me greatly in thinking and telling my stories visually. I believe in great dialogue and visual storytelling. They are 2 pieces of the puzzle and I believe equal time should be spent on the pair, because of this, and that I usually direct what I write, my writing has camera moves and notes for the edit which help me streamline my process as a filmmaker.

In my films I focus on the magic, wonder and humor that was there in my childhood. Imagination was King, it granted adventure, fun and the ability to discover new worlds, find the lost relic, explore the unknown and slake my curiosity of “What if?”.

I've also written for film and entertainment websites Indiewood Hollywoodn't - Indienyc.com, and Bamkapow.com.. Below are some links to some of those articles:

In the Name Of... was a dare. There were 15 pages, 5 locations and the edit to complete in less than 3 days. The producer, Olga Kalashnikova, sent me the script, called me while she was driving across the country from LA to NY and dared me to help make it happen. In the spirit of the challenge the script was written feverishly by Jeff Wallace. I found the story and themes reminiscent of early Twilight Zone episodes. The main character is also our antagonist and is experiencing his own Dickensian visitation before vengeance appears and, while beautiful, is unforgiving, raising the question as to who, or what, his visitors were. I loved it, it had themes of guilt, redemption and revenge, it was a challenge and I couldn't say no. The storytelling challenge became, for me, how to keep the vagueness of the visitors state of existence without losing the flow of the story so the audience could be left with a revelation and decision to make as to who they were at the end. I did this by giving clues in music and setting to signify what is real and what is our main character's delusion, as I saw it.

I'm extremely proud of our team. I couldn't ask for a more committed group of talented people. 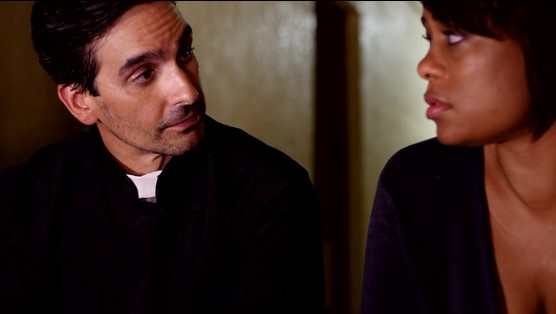