With 1 in 27 rapes reported, and the conviction rate for reported cases at between 8 and 14 percent, it is clear that South Africa is facing a crisis.

After Rhodes University silenced the Chapter 2.12 campaign (which drew attention to rape culture on university campuses), students felt like their concerns were not heard.

Tired of not being listened to, students decide to take matters into their own hands and compile a list of alleged rapists on campus.
The list goes viral, and this sparks two weeks of protests and disruption including barricading the university, protesting topless to make a point, and police firing rubber bullets at and arresting students.

Ultimately, the University obtains an interdict against the protesting students. While students have made their voices heard, this profound disruption of the status quo is brought to a halt, for now.

Michael Dorfling is a lecturer at AFDA, the South African School of Motion Picture and Live Performance.

He completed a Bachelor of Journalism degree specialising in television production (documentary arts). During this time, he was the head of video at Activate Online, a student media organisation in Grahamstown. Thereafter, he did an internship at the South African Broadcasting Corporation. He has been editing video since he was 13 years old and was a freelance videographer before going into film education.

Michael's interests include issues around rape, domestic abuse, corporal punishment in high schools, and threats to the right of privacy and freedom of expression (especially online). 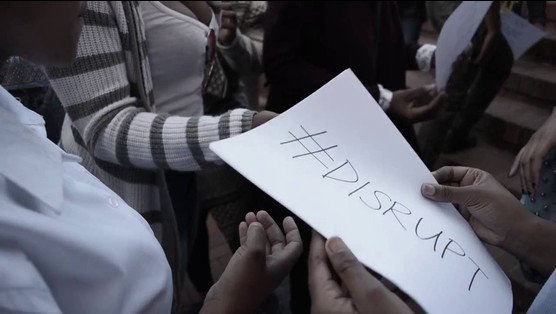