The legendary War of 1812 story of Laura Secord and her journey to warn the British Army of the impending attack by American soldiers... As Seen Through The Eyes Of Her Cow !

Scott Andrew Kurchak is a Canadian born actor, director and writer who has worked extensively in Theatre / Television / Film in both the US and Canada.
As a filmmaker, Scott' first Feature "Give&Take" won Best Comedy at the New Hope Film Festival and
Best Western New York Film at the Buffalo Niagara Film Festival, as well as receiving an Audience Choice Award at SoCal.
"Give&Take" received nominations for Best Feature and Indie Spirit at New Hope Film Festival.

Scott has recently produced and directed special online videos for the Buffalo Philharmonic Orchestra including their successful BPO at Carnegie Hall campaign as well as an upcoming promotion for Naxos Recordings.

A native of St. Catharines / Thorold Ontario Scott began his professional career in Toronto. He landed his first Equity acting job at the age of 16 in Rene Aloma's play "A Little Something To Ease The Pain" for the company that is now Canadian Stage at the St. Lawrence Centre . Other highlights of Scott's career in Canada include "The Shadow Box", " A Christmas Carol" a very successful run of his one man play "Byrdbrain" in Toronto, and in London Ontario's Grand Theatre production of "Biloxi Blues" directed by Martha Henry.

After obtaining his Green Card for the USA, Scott lived in NYC for many years driving a taxicab between gigs. Highlights include his time with the improvised theatre company IMPRO! where he served as Performer and Executive Producer, work with the 42nd Street Workshop, and Lightning Strikes Theatre Company.

Scott now makes his home in Buffalo NY with his wife Jana , and is President and Executive Producer of his production company
Arlington Place Pictures LLC.

With A Cow’s Tale : The Laura Secord Story , my goals were simple. To take a story that I had grown up with and to tell it in a fun and very different way. I wanted to be able to work with actors that I have worked with in the past, ones that I trusted and knew would bring the story’s historical characters to life. My hopes were to make a unique and quirky short film.

The first big choice was to tell the entire story of Laura Secord’s eventful journey as witnessed through the eyes of her cow. Working with our editor and Digital Art Director Roger Scott, we came up with a unique painterly look giving the film a distinctive “Cow Vision”.

As for music, My earliest discussions with our sound designer and music producer Jeffrey Winston Mikulski we wanted to use tunes and instrumentation that would have been around at the time of the story.These songs include versions of “Come on Ye Bold Canadian ” a traditional tune about General Brock at the Battle of Queenston Heights, “The Grenadier March” a tune associated British and Canadian regiments and “To Anacreon In Heaven “ a famous drinking song of the day that Francis Scott Key would soon use as the tune for his poem “The Star Spangled Banner”

Jeffrey created some remarkably wonderful atmospheric pieces for us. I am so sad that he was not able to be with us and witness the results of his lovely work. .

Jeffrey passed away on March 20 2014. I am so grateful to him for his friendship and his enthusiasm for this film that to this day keeps me and all of us on the team going forward.
It is to Jeffrey that we dedicate this film. 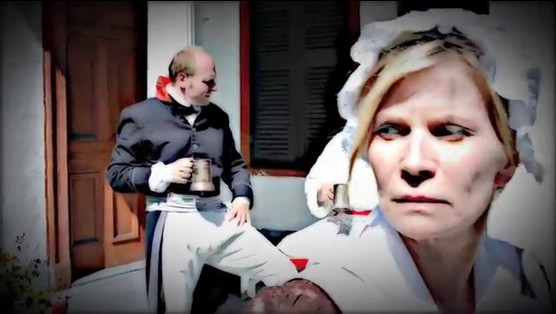